Clara and Maud are two volunteers who have been in the first flow of the project Vitamin T 17 funded by Erasmus+. One of their task was developing non-formal and socio-cultural activities in schools and kindergartens within the “Aici Acolo” Program develped by A.C.T.O.R. In this article they are writing about their experience and their feelings in accomplishing this task. The first interview is with Clara from Spain. Followed by Maud from France, who is telling us specifically about her first lesson experience. Enjoy it! 😉 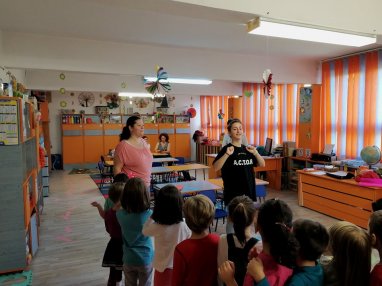 The answer is easy, I introduce myself! The first moment I felt nervous, suddenly all were silent and a lot of eyes looked directly at me. Everyone expects you to do something. But after saying the first sentences everything else is flowing and I forget the nerves.

3. The teacher doesn’t know English, what can you do?

One of my first questions when I meet the teachers is “Do you speak English?” In kindergarten I did two lessons, in the second class the teacher didn’t know English, but she helped me trying to translate what I was trying to say. With the help of thousands of gestures, some words I know in Romanian and examples all went well! Something similar happened at school, the first teacher did not know much English but I had the help of a girl of the class who knows more English than me! (actually this is not very difficult, but she knew very good English)

4. Are they understanding you?

Sometimes children looked at me confused, or after asking question they don’t answer. If I ask in Romanian, I think it can be several things, sometimes they understand the words but not the question, sometimes they look at the teacher maybe waiting for their permission, other times they are shy, or just my pronunciation was bad and they don’t understand me.

5. The projector doesn’t work, what can you do?

Of course I knew this could happen, but the first day? Then I thought “Well, if I fix it the first day I can do it any day!” Instead of using the powerpoint I had prepared, I used printed images and some questions I had written in Romanian.

6. Are they enjoying your lesson?

This was one of my biggest doubts. I do not know what their expectations are or what their preferences are. When they are silent I am afraid to think that they are bored, so I try to be active and motivate them to participate.

7. Is the teacher understanding you?

At times I am not sure if the teacher is understanding what I mean. At some point, both in school and kindergarten, I had to pause to explain again to the teacher, although these were small details not too important.

Yes! at some point I improvised. There are things that I invented at the time, such as when I was taking things out of the pilgrim’s backpack, I had planned to leave them on the table, but a girl guessed that inside the backpack was a hat and I put it on the head , then I did the same with the raincoat, etc. Also when the projector didn’t work I invented other questions that I didn’t intend to do.

When I have 5 minutes to finish the lesson and I start to save the material I think “Okay, now I have to say goodbye” but I don’t like to just say “Goodbye”. In the school, I give an origami figure to each one, they have to put their hand in a bag and take out a figure. It is like a goodbye surprise gift. I would like to do it in all sessions but I do not think it is possible, I have to do 70 figures because I have two lessons and it takes me a lot of time. I thought it was a good idea because so I also practice origami but I do not always have enough time. Anyway, in the sessions I always say goodbye saying thanks and hoping that everyone has enjoyed. At school the kids get up and give me a hug, it is great!

10. Have you achieved your goals?

On the way back, when you sit on the bus or in the subway seat this is the question you may have in your mind “Have I done what I came to do?” “Have I achieved my goals?” It may be early to answer this question. I like to think that I have achieved some goals, but I think it is something that you can know in the second lesson because you see if the children remember what you taught them, you can ask what they liked the most, etc. 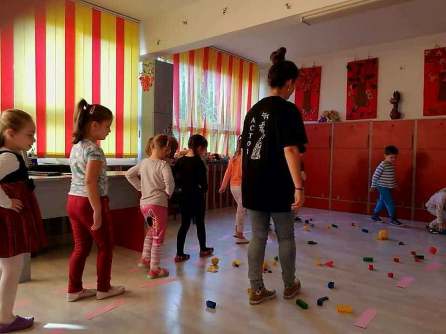 Making a lesson plan was something very stressful for me because I had never done that before and it was really not my intention to “teach” in schools. It took me a lot of time to find ideas and what I really wanted to do in my lessons. Once I had found what inspired me (paint) it was really easier and a lot of create ideas came along. When I finally finished to plan all my activities along with their timing then it was time to begin!

My first lesson was… a rush. The kids were super excited when I entered the classroom and I didn’t expected that amount of energy or at least not in the firsts moments of the lesson. I had three lessons of about 45 minutes each and they passed in a flash.

I remember I was a bit stressed before starting but that feeling disappeared as soon as I began to speak. I felt more relaxed and comfortable after a few seconds in front of the class because the kids were enthusiastic and so was I.

The first teacher was super nice and some others were in the room watching my lesson. They even went to find a colleague of them that spoke a bit of French to exchange some words. In the end, one kid offered me and my very helpful assistant Elisabetta, some sweets.

After my lessons I was glad because it went better than I expected. The kids had a lot of fun and me too even though I was always in a hurry. I was also a bit frustrated because I realised that I underestimated the time they would take to do the activities so I wasn’t able to do my whole lesson plan since I planned too many activities. However it’s true that I chose to let them spend more time doing one activity instead of stressing them with my timing. Making them do less activities but taking time to enjoy them was more important to me (and to them also I’m sure). 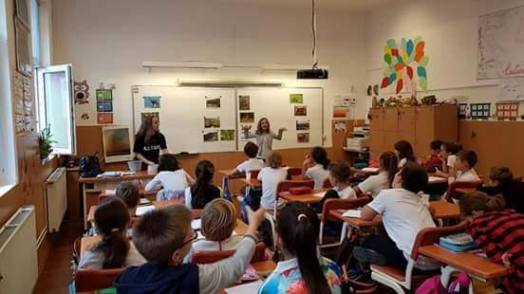